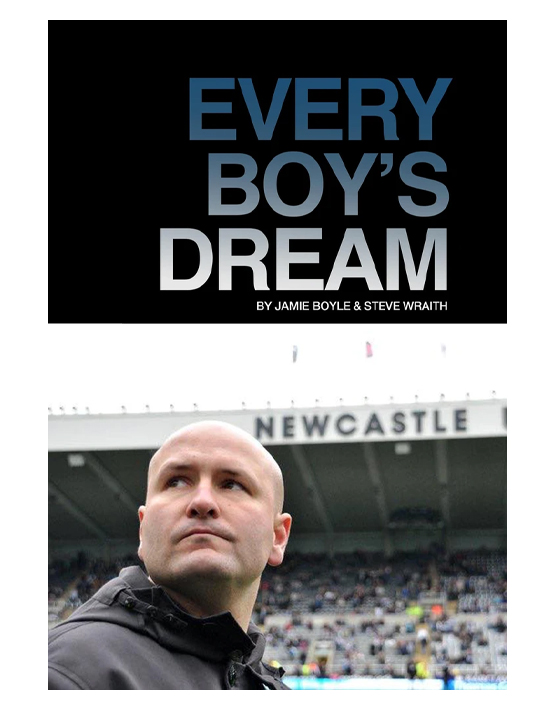 Steve Wraith is a name that divides opinion in the North East. Actor, writer, promoter, and a shameless self publicist he is like marmite. You either love him or hate him.

A former sub-postmaster and doorman and a well known Newcastle fan, Steve has always spoken his mind and had a ‘love hate’ relationship with the club and fans alike and now he feels it is time to put the record straight. The book also looks back at his journey through the murky world of ‘Unlicensed Boxing’, and his battle to carve a name for himself in the Professional game, working with the likes of Mike Tyson, Joe Frazier, and Floyd Mayweather and from the world of football Shearer, Gascoigne and Asprilla.

From starring in Panto, to running for local councillor, Steve has spun every plate thrown at him and even signed a contract for his beloved Newcastle United and that he said was ‘Every Boys Dream.’

“Every Boy’s Dream takes you on an amazing journey. Steve has friends in all walks of life and that speaks volumes for him as a person. A good friend. Never let me down.” Freddie Foreman

“I have worked with Steve for over 25 years on the after dinner circuit and his passion for Newcastle United is there for all to see. He has lead a remarkable life so far. He has achieved his dreams on many occasions.” Malcolm Macdonald

“Steve is one of life’s good guys. He has worked hard in pro-boxing and has earned the respect of the sport. Top man.” Ricky Hatton